It was over five years ago that a rescue came to us. We had two adult Landseers when one Saturday afternoon we received a call. Would we be willing to open our hearts and home to a 9 month old black female? 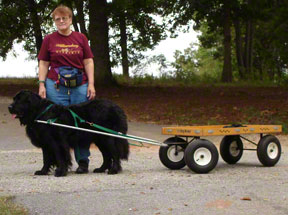 We dashed to PetsMart for assorted items. The only thing this beautiful little girl did wrong was be the wrong breed. It seems the wife wanted a boxer and told her husband to take the Newf to the shelter/pound. They had a 3000ft. home and the Newf was only allowed in the foyer.

As luck would have it, a relative of the man knew someone that had Newfies and asked them to take the female before she went to the shelter. They did and then they called us.

Sunday morning we drove three hours to the next state and met the little girl. It took three of us to put her in the travel crate; but once she saw our other two looking in at her she settled immediately. Once home, she bounced out of the crate, into the house and into our lives. She was all Newfie.

It didn’t take her but a couple of hours to decide she was staying, roll over on her back and sigh with contentment. I won’t even try to explain what she thought of treats and Eagle Pack kibble.

Christmas and birthday all rolled into one. You’ve heard people talk about the unplanned third child. Well she was it and given a second chance we wouldn’t have done it any other way.