Snowy was as born on Christmas Day 1998, the product of a backyard breeding. She was bred just to make money for the “breeder.” She was sold as a “farm dog,” to be kept outside and to have puppies to pay for her keep.


This past August, Snowy was brought to a veterinarian’s office as a late afternoon emergency as she had gotten her leg caught in her chain. Since the injury was at least five days old, she was quite sick, very lethargic and covered with maggots. She had a large wound on the right back leg, just above the ankle and extending downward toward the toes.

The veterinary staff worked several hours to remove the maggots, shave the affected areas and assess the wound. Due to its severity, the family decided not to treat the dog and asked to have her euthanized. 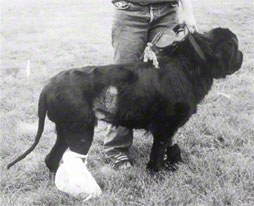 Dr. Janine Callen, the veterinarian, persuaded them to sign Snowy over to her, and she elected to try to save the dog. She felt it was imperative to save the leg as her other hip was dysplastic and amputation was not a viable option.

Dr. Callen contacted Lynn Reinhart of Newfoundland Rescue, who then called me. I made arrangements with Dr. Callen to pick up Snowy. Nothing prepared me for my first look at her leg. It was a horrible wound. The skin from above her heel to midway down her foot on the top was gone.

The whole foot and toes were swollen. She was probably going to lose the second nail and possibly part of that toe. The large pad on the bottom of the toes was necrotic with a large area of pus underneath.

We consulted with several local veterinarian surgeons who felt the surgery required was beyond their area of expertise.

Dr. Newton examined Snowy’s leg and on August 21st, he and Dr. Gray, along with Dr. Leeann Oliver at the Twinbrook Animal Clinic, operated on Snowy. They opened the areas between the toes, removed the necrotic bone and the large bottom pad, and opened up the entire foot on the bottom from the toes to the heel.

On September 8th, Dr. Newton, along with Dr. Callen and Dr. Oliver worked for 2 ½ hours to graft new skin to the large open wound on her leg. Unfortunately, when the bandages were removed a week later only one small area on the inside of the leg had taken.

When Snowy first came to us, she refused all food and drank only small amounts of water. She was sad, withdrawn and depressed. She would lie in the ex-pen, not moving, unaware of her surroundings. Her eyes were flat and lifeless.

She had no smile on her face. Snowy had given up; she had accepted that she was going to die. She had no purpose and no one to love that loved her.

I talked with her and told her that we were not going to let her die, that too many people were working very hard to get her better and that we cared very much for her, but it would not work unless she wanted to live.

We never bothered to close Snowy’s pen during the day, as she never tried to get out of it. I had fallen asleep on the couch one day and was awakened by a shuffling sound. She was crawling on her belly out of the pen.

She stood up and walked over to the couch and laid her head on my chest and proceeded to wash my face with big slobbery Newfie kisses! I held her beautiful head in my arms and knew then that she would not die. She had made her decision!

When I looked in her eyes I could see something coming back, a small spark where before there had been none.

To understand the Newfoundland spirit, one needs only to look t Snowy. Even in the days she had given up hope, she walked on her foot. When the second toe and nail fell off exposing bone, she walked on the foot.

When most of the graft failed and then the nails on the other three toes fell off, leaving only small nubbins of nail and bleeding nail beds, she walked on the foot. When we had to debride the dead areas of tissue and separate her toes to clean between them, she would turn her head away and never move.

Snowy is indeed a miracle. Certainly a guardian angel sits on her shoulder. Everything just seemed to fall into place at the right time.

All along the way we have been blessed by small Snowy miracles. When Snowy needed medical care, the Twinbrook Animal Clinic was there. When she needed a home, Newfoundland rescue stepped in to provide a home and love for her.

When we needed a surgeon, we found Dr. Newton and Dr. Gray. 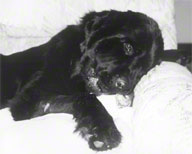 I truly believe that Snowy’s life was saved for a purpose. She is in the truest sense of the word what “rescue” is all about. Snowy has become a spokesdog for Newfoundland rescue across the country.

Whether rescued from a Missouri puppy mill buy-out, whether beaten and abused, or just plain ignored and neglected, Snowy speaks for them all. Her injuries, her pain and her patience make hers a story that deserves to be told—again and again, lest we lose sight of what is important.