Trooper came to me for foster care and veterinary care, major vet care. He was about 3 months old when he was hit by a car. He was out in the yard by himself, dug under the fence and ran out into the street. His owners took him to the vet and had him x-rayed. Although we never saw these radiographs, the owners said that he had a broken leg.

They opted not to fix the leg, against the advice of their veterinarian and took him home. A friend convinced them to give the puppy to rescue so that he could be cared for and hopefully fixed up. 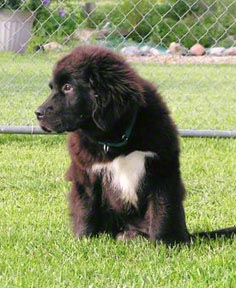 During his transport to my home, another River King member changed his name to “Trooper.” As it turned out, this was quite an appropriate name for this little guy. He arrived at my house unable to walk, but dragging his rear end around with his now very strong front legs.

He was very good at moving around like this, but in less than 24 hours I was in disbelief that anyone could watch him do this for very long and feeling very sorry for Trooper. Radiographs taken the next day revealed a broken pelvis and two completely shattered femurs.

Luckily, the pelvis had not been displaced as it had healed almost completely. We immediately scheduled him for surgery with one of the best orthopedic veterinarians in the area.

Although I trusted this surgeon implicitly, I admit I did have my doubts. Should we even try to save this puppy with so much damage?

It was hard to justify the amount of money that rescue would spend on ONE puppy trying to give him a good quality of life when there were so many other dogs that could be helped. After speaking with my vet (a River King member) and RKNC’s rescue chairperson, we decided to give him a chance.

He had such a great personality, was very young, and he had really won our hearts in the short amount of time that we had him. 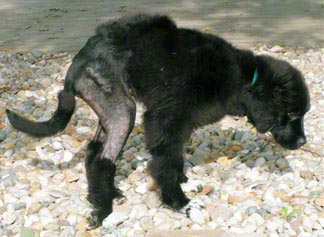 He had bilateral femoral head osteotomy, removing the head of both femurs, removing the shattered bones and letting the muscles form new hip joints. Since he was having both joints removed, we got a cart for him to use until his rear legs got strong enough to hold his weight.

Luckily, he was in good physical condition, not overweight, and still relatively small. I modified the cart to fit this young boy, but never used it. He recovered quickly; I helped him up and down steps with a towel under his belly and kept him from playing with my dogs.

I was amazed that little Trooper always had a great attitude and never showed any signs of pain. I am sure he did have some pain, but soon he was walking around the yard by himself. He did have to have one more surgery as one of the incisions on his hip was not healing properly. He started to get around the yard quite well, although he was still very unsteady on his feet.

After all the staples were removed from surgery, I was able to let him swim. He loved the water and swam very well and very fast!! Twice a week, he went to water practice with us and swam and swam.

He even got to play with Bumper, another rescue puppy about his own age who happened to be blind. By the fall, we felt he was ready to find his forever home. He was still not 100% on his rear legs, but it was a possibility that he would never be.

He would just have to get stronger with time and hopefully lead a relatively normal life. He found his forever home with a young couple and their two Airedale Terriers.

Trooper has a great time playing with his new buddies and is playing fetch and jumping up on the bed!! He is now officially spoiled rotten!!