Lane is one of the 700 dogs rescued by the Humane Society of U.S. from a Tennessee puppymill in late June. She was transferred to the Washington Animal Rescue League (WARL) with 100 plus dogs. Lane spent her whole life in an outdoor elevated cage, filled with feces, no water and little food.

She was only 70 lbs, her musculoskeletal condition was poor, a cut on her nose, she had at least one litter of puppies by age two and diagnose with Pyrometra and had to be spayed immediately.

WARL contacted CNC in early July looking for our assistance with her. They said she was not adjusting well in their open shelter and it appeared she was mentally shutting down. We agreed that by getting Lane into a home environment she would have the best chance for survival.

Her foster parents immediately went to pick her up, carried her to the backyard in her crate and let loose to run the yard. Lane immediately ran under the deck where she spent the next 6 hours trying to be coaxed out.

In the house Lane went to the kitchen where she would stay by her choice, except to go for leash walks. She was terrified of the out-of-doors. In her first month, Lane stayed silent and would not even get a drink of water unless she was alone in the kitchen.

By October, she started to chew on her toys at night in the dark. It is also getting easier to get her outside for walks. She is a gentle girl that gets along with other animals.

Lane is now 87 lbs and still has a few medical issues which are being cared for. On November 6th Lane made her first “Woof” in the early morning hours.

Her foster mom says she can also hear her playing during the night. We know we have a long way to build this girls confidence and put the fears created by the puppymill behind her. 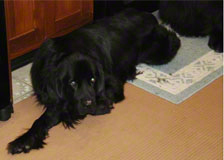